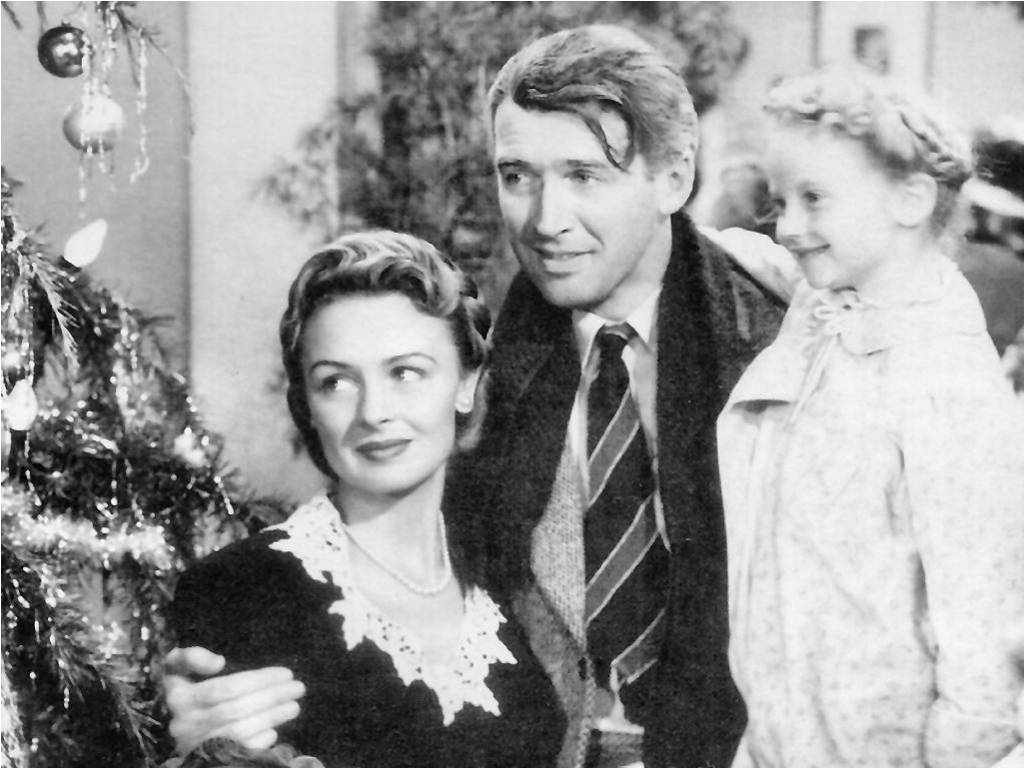 A few days before Christmas, I found myself in tears watching the Frank Capra classic with James Stewart.  “It’s a Wonderful Life” is the Christmas movie of all Christmas movies.  If you haven’t seen it, here’s the gist: George Bailey has always done the “right thing”, from rescuing his brother who’d fallen through the ice when they were children, to stopping a grief-stricken pharmacist from making a fatal error in preparing a prescription, to abandoning his dreams of travelling the world in order to save the bank that his father had run with humanity and compassion.  The baddie of the story is the big old capitalist who’s trying to take over the bank and the town, who’s a slum landlord, and who only cares about making a profit, regardless of the human cost.  And in these days of austerity (for the masses) and payment by results, a time when the bean-counters, as Tom Peters predicted, seem to have taken over the world, this film has never seemed more apposite.  When it looks as if the bank is about to go under, George loses faith and heart and sets out to commit suicide.  It’s just before Christmas, and this being north America, it’s freezing, with the blizzards blasting in snow that lies layers deep.  But as he stands on the bridge over the icy river, about to jump, an angel (named Clarence) comes along, jumps into the river, and in apparently saving Clarence’s life, George saves his own.  Clarence’s task is then to show George how much poorer the world would have been had George Bailey never been born.  And of course, George’s community in this vision reminiscent of “A Christmas Carol” is bleak and harsh.  Lives that he touched with love and compassion are bleak.  The brothels and gambling dens have replaced shops and cinemas, and everywhere is aggression and violence.  It all ends well, the local people club together to save the bank as a way of thanking George for his support over the years, and his four kids and sweet wife get the Christmas they’ve dreamt of.  Well, clearly there are lots of lessons to be learnt, and you can reflect upon the moral of the story in many ways.  But I think the main lesson is that we each make a difference.   I got to thinking about the difference that my lovely partner makes in the world, and the lives that together we’ve touched, and what my contribution to the world might be.  And I thought about my work colleagues, who are very special, and about the other angels I’ve been blessed to know.  So what are your special gifts?  What would the world be like had you not been born?  How are you an angel to the people you encounter on your journey?  And how do you want to be?

It’s still Christmas eve, but I’ve had a wonderful gift already.  There’s a bit of a story to tell, though, to set the scene.  Chris and I had a very sweet next door neighbour when we bought our first flat.  He was an older man, a widower, and he loved cats.  In fact he tried to steal ours, one of which voted with her paws and moved moved in with him.  He adopted us, and we adopted him.  When he was younger and fitter, he’d do some of the heavy jobs with which we struggled.  As he got older and more frail, we took more care of him, and we were with him as he lay dying, doing what we could to soothe him and ease his passage.  Apart from his relationship with us, he was something of a recluse, but up until he went to live in a care home, he had a nightly routine in which he’d cycle a little distance up the road to the fish and chip shop on Spa Hill which was run by Elizabeth and Chambi, a lovely Cypriot couple, who’d been forced to abandon their home in Cyprus when the Turks invaded the north of the island in 1974.  Bob, our friend, was diabetic and shouldn’t have been eating so much fried food, but he was a creature of habit, and every weekday evening, he’d go to their shop and buy a portion of fish – which he gave to the cat – and chips, which he’d eat.  As he became more frail, and more reliant on meals on wheels, his visits became less regular, and Elizabeth and Chambi were concerned about him.  And so every Sunday, they’d send one of their daughters to his house with a full Sunday roast.  This went on for several years, until Bob fell off his bike, broke his hip, and moved into a care home.  After Bob died, and they retired, we stayed in touch with them, mostly to exchange Christmas cards and little gifts.  Usually there’d be a plant or chocolates from us, and a box of Kourabiedes, delicious Cypriot biscuits, from the depths of Elizabeth’s pantry for us.  This year, we received a card which read, “From Elizabeth and family.”  We summised the worst: Chambi, who had suffered various health problems, and was well into his eighties, must have died.  And so rather than writing a card, we bought a nice poinsettia and I took it to the house this evening.  Poor Elizabeth, I was thinking.  How would she manage without her tall, gentle man?  I prepared to greet the widow, and wondered if she’d lost her plumpness and her sunny smile.  Imagine my delight when the door was opened by – Chambi!  Of course I couldn’t tell them about our guessing that he’d died and being so pleased to see him alive.  But I was very, very happy to see this dear couple both in good health.  They are the George Baileys of our little community, and they have done their bit to make the world an altogether better and more humane place.  Happy Christmas, and may you have a healthy, happy 2013.